4GDB is Bert WIlls, John Inmon, Derek O’Brien, Alan Haynes, Paul Pearcy and Glenn Fukunaga, an all-star group of Texas musicians, some of whom had never met, brought together in February 2015 for a unique, collaborative recording session in Austin, Texas at Arlyn Studios.

"Too Many Great guitarists go thru life underappreciated. This project shines a much deserved light on four distinct musical voices from the Lone Star State. Well played, well recorded, and well done all around. I´m a picker that gets too much credit sometimes and it does my heart good to brag on these boys." Mac McAnally www.macmcanally.com.

"I am a blues lover and I love this record. It covers some of my favorite blues songs. The musicians are all great veterans and it's like an all-star game where the players get to show their stuff. The selections range from up-beat boogie to slow blues and several tempos in between. The guitar-playing is really outstanding. There are some great instrumentals, Last Date and the soulful People Get Ready are moving and played with touching emotion. Hello Josephine is done in a playful way and Mother Earth let's us know that no matter how great we think we are, we all gotta come back to big mama.This is a really enjoyable record, puts a smile on my face." Rudy Tomjanovich

Traditionally the release of a CD is timed to coincide and promote an upcoming tour, but chances are you'll never see this collective of musicians on stage together.

If you are wondering why, just ask Dan Cook, the man behind this one off gathering … "I simply wanted to showcase six extraordinary musicians that I have a great deal of respect for." And that, in a nutshell, is what this project is all about.

From Austin, Texas, by way of Houston, is the one and only Alan Haynes. Also from Austin and leader of the infamous Antone's house band, Derek O'Brien. John Inmon, from the Lost Gonzo band, plugs in beside Gulf Coast legend Bert Wills. These are guitar players' guitar players … one and all. Anchoring the rhythm section are the rock solid timekeepers, Paul Pearcy on drums and Glenn Fukunaga on bass. Houston's Annika Chambers, 2015 BMA nominee for "best new artist," lends her vocal talent in a special digital-download only alternate version of the track "People Get Ready."

So sit back, turn it up and experience six master craftsmen having fun in the studio, without any outline or restrictions.

"When an ambitious concept becomes a breathtaking reality, you've got lightning in a bottle. That's the best way to describe this once-in-a-lifetime gathering of Texas guitar superpowers. 4GDB is more than an album. It's a documentation of a magical moment in time that will likely never happen again." Hollywood Steve Rangel- Music News, Houston.

All in all, Austin is a pretty good place for a drummer to live. Even back in the 1970's, when I was going to The University, there was a vibrant music scene. It was a big town then, and not a city, yet. To be a professional musician and get a steady paycheck, you had to be on the road. So, I did that for most of my 20's and 30's. When I turned 40, I stopped the travel and made a stand as a studio musician.

That's been 20 years ago now and I've had the opportunity to play and record with a lot of great musicians.
In February of 2015, we went into the best studio in town with some great players and a whole lot of analog tape. We turned the machine on and just played the Blues for 5 days. I don't know where music in Austin is going, but I do know that this is where it comes from. It all comes back to the Blues.

You probably should come to Austin and check it out. Everybody else is.

Get Deadeye Dan to give you my number. I'll show you how the cow ate the cabbage, where the bodies are buried, and how to make all the traffic lights on Guadalupe Street turn green. We can eat out of a trailer and then walk on down to a place called Stevie Ray Vaughan.

It really is a friendship with the Blues that makes Austin rock.

If you want to know more about me visit www.paulpearcy.com.

From Blind Lemon Jefferson to T-Bone Walker and Charlie Christian, to Eric Johnson, Jimmie and Stevie Ray Vaughan, and ZZ Top's Billy Gibbons, the Lone Star State has always been a hot bed of string-bending guitar wizards. Though he is far too self-effacing to ever put himself in such august company, John Inmon fits seamlessly into that six-string continuum.

His peers know John as one of the finest guitarists in Austin, Texas (and, considering the competition, that is high praise indeed); his fans know him as the signature guitar style that has, at one time or another, propelled the music of Townes van Zandt, Jimmy LaFave, Eliza Gilkyson, Ray Wylie Hubbard, Jimmie Dale Gilmore, Joe Ely, Delbert Mcclinton, Marcia Ball, Omar and the Howlers, the Lost Gonzo Band, Bruce Robison, Pat Green, Michael Martin Murphy, Keith Sykes, Larry Joe Taylor, Rusty Weir, Bobby Bridger and many more.

As winner of the Texas Music Awards Producer if the Year in April 2012, John has become known as a first rate producer, producing CD's for a number of artists nationwide. "I've been making records since the 60's, so I know how to make records and I believe it's my duty to pass along some of what I've learned to new artists. Plus, I get a kick out of it- it's what I do."

Born February 19th 1956 in Houston, Texas, he started playing guitar at the age of 8 and soon discovered the Blues when he was about 12 or 13. At that time Alan never thought about making a living playing guitar. While listening a lot to B.B. King, Albert Collins and Freddie King on the radio, he always thought he'd become an artist. And his artistic talents were not lost because in 1996 he did the graphics for his album "Wishing well" on his own.

It was in the early 70's - Alan was about 16 - when he was standing at the crossroads and had to choose his way. He made up his mind and hit the road of Blues ... and he "knew that there was no turning back."

Alan's first professional effort started in the late 70's when he joined the "Texas Boogie Band" and soon became the front man and leader of the band. The bass was played by none other than former Johnny Winter's sideman Tommy Shannon, who later reached fame as part of Stevie Ray Vaughan's "Double Trouble". The "Texas Boogie Band" got lot of radio play and became the house band at the Texas Opry House.

After moving to Austin in the early 80's, Alan formed his band "Alan Haynes and the Stepchildren" and recorded his first EP, "Seventh Son". With him on board was the legendary Uncle John Turner, who, like Tommy Shannon, had also been playing with Johnny Winter for years. Another legend can be heard on "Seventh Son": Bobby Blue Bland's guitarist Wayne Bennett, with whom Alan became good friends. So Alan went on to perform some shows together with Wayne Bennett and Bobby Bland.

Alan was inducted into the Buddy Magazine Texas Tornado List (The Greatest Players in Texas. Perhaps The World.) in 1980.

In 1995, Alan released his second album, "Wishing Well", with help from "Double Trouble", Reese Wynans, Tommy Shannon and Chris Layton along with old "Thunderbirds" Preston Hubbard and George Rains. This album received great reviews in many magazines all over the world and led to a featured article in the "Guitar Player Magazine", "Alan Haynes - New angles on classic Blues". (August '95)

Alan has graced the covers of such magazines as Southwest Blues (January '99) and Buddy Magazine (April '00). He has received rave reviews for his 2002 CD release on Red Guitar Records, "Live at The Big Easy" by Dan Forte in the October 2002 issue of Vintage Guitar Magazine.

When you have a chance to see Alan playing.... Don't miss him!!!

If you want to know more about Alan visit www.alan-haynes.com.

Playing the bass and doing it exceptionally well has given Glenn Fukunaga an all but magical life in popular music. The Austin, TX-based player has not only become one of the very musical city’s premier bassists on recordings and performances with top artists in the Texas music scene, but he has also played with such legends and stars from an array of musical styles as Chuck Berry, Bob Dylan, Robert Plant, Dr. John, The Dixie Chicks, James Cotton, Freddy Fender, Brian Setzer, Earl King, Flaco Jimenez, Junior Wells, David Amram and others. 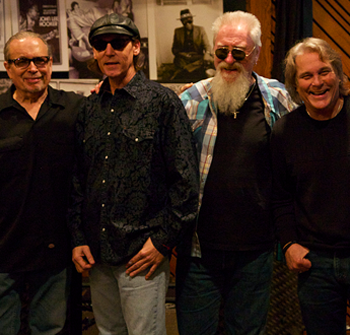